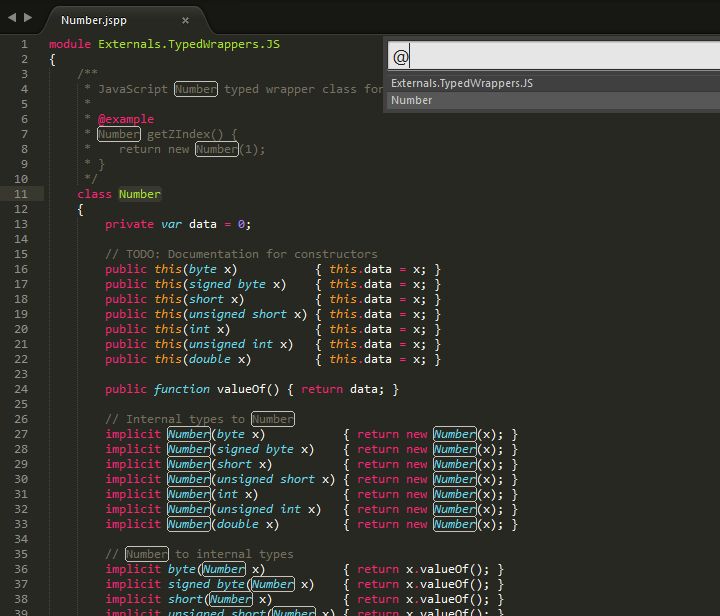 As with all the previous editor integrations, the JS++ Sublime Text integration will be distributed with the next version of JS++. We want to re-state Onux’s full commitment to providing maximum editor and IDE integration. In the past two weeks alone, we have provided full editor integrations for three of the most popular code editors.

You can download the Sublime Text plugin from GitHub.

The popular vim text editor for *nix systems now supports JS++ syntax highlighting. You can download the code from GitHub. 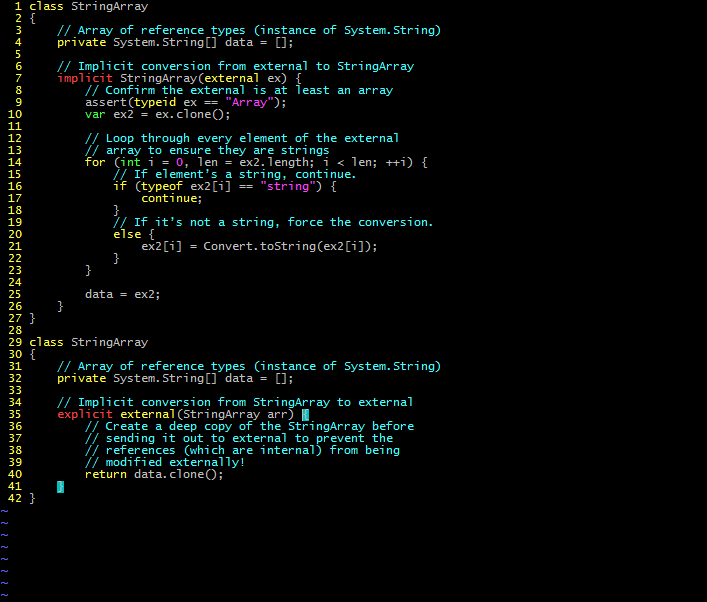 Just like the Notepad++ plugin, the vim plugin supports extra goodies like TODO comment highlighting and documentation generator comments. The vim plugin will also be included into the next release of JS++. At Onux, we remain committed to maximum editor & IDE integration for JS++.

Visit the GitHub repository to download the free vim plugin. 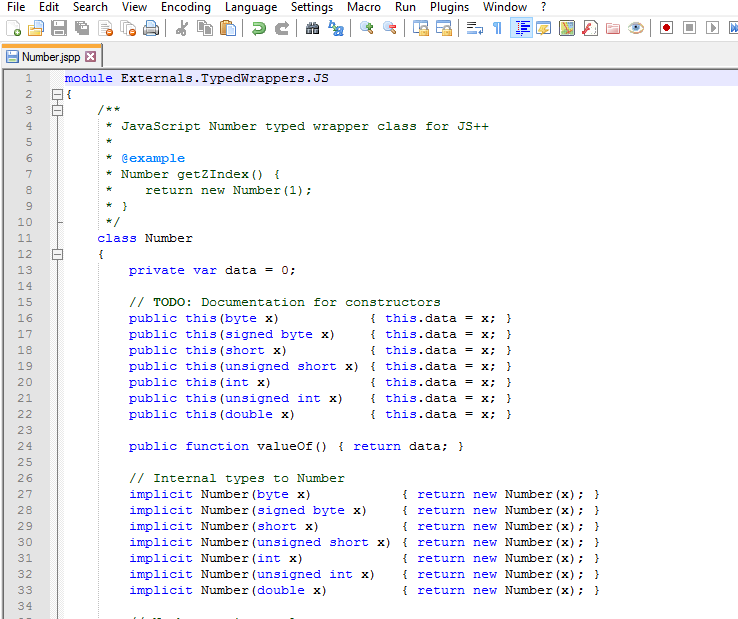 The Notepad++ plugin will be packaged into the next release of JS++, and we are working to deliver maximum tooling for JS++ – beginning with editor & IDE support.

Visit the GitHub repository to download the JS++ Notepad++ plugin.

Today, we are proud to announce JS++ v.0.4.1 Early Access Preview. Along with this release, JS++ is officially going into public beta.

With JS++ v.0.4.1, you get a fully “typed” JavaScript superset which leverages the patent-pending JS++ type system. Here’s what’s new:

This release was about solidifying JS++ and fixing as many bugs as possible so that we would have a rock-solid typed JavaScript superset. To this end, the major bug fixes are actually in the parser which should be 100% attributed to our team member, Anton, who has had full responsibility over the JS++ parser since the beginning of the year. The parser was completely re-done and is now stable and very well-tested with over 3,000 test cases and 184,000 assertions.

The next release will see new keywords being added such as final, inline, and foreach.

From here, we will be working to deliver object-oriented programming (OOP) with classes and modules. This will “complete” the JS++ type system. Interesting things are on the horizon for JS++!

Optional (nullable) types will be coming to JS++. This usually stokes fears of null pointer dereferencing. For example, in Java, this is known as a “NullPointerException”.

I call it my billion-dollar mistake. It was the invention of the null reference in 1965. At that time, I was designing the first comprehensive type system for references in an object oriented language (ALGOL W). My goal was to ensure that all use of references should be absolutely safe, with checking performed automatically by the compiler. But I couldn’t resist the temptation to put in a null reference, simply because it was so easy to implement. This has led to innumerable errors, vulnerabilities, and system crashes, which have probably caused a billion dollars of pain and damage in the last forty years.

However, it’s possible to have nulls in a language without ever having NullPointerExceptions.

In the above example, foo can be either an instance of Foo or null at runtime. This creates the potential for dereferencing a null pointer. This is an easy fix though – we just check that foo is not null:

By checking that foo is not null, we can guarantee foo is at least an instance of class Foo – thus making it very straightforward for us to check that the bar method exists. This is a process known as type refinement. What’s interesting is that the compiler is able to actually ensure you’ve made the check before you ever run your program. It achieves this by examining the control and data flow. This is cutting-edge research known as flow-sensitive type systems.

In addition, by examining the control and data flow, if we can ascertain that null was never passed into the doStuff function, type refinement would not need to occur, and you would not need to check for null. Thus, this code – with no null check – will still pass a compile:

On the other hand, as soon as you introduce null, you need to check for null too:

null is a first-class type in the JS++ type system so, combined with JS++’s sound type system, JS++ is able to categorically determine that you’ve checked foo is non-null without ever executing any code.

JS++ replaces the “void” keyword as a type annotation rather than being like JavaScript which dictates that “void” is a keyword used to evaluate an expression and always returns undefined. This doesn’t serve much practical purpose. You can accomplish the same effect in many other ways:

Furthermore, “void” is very rarely used in real-world JavaScript. This is why I always say it takes an experienced JavaScript programmer to design a JavaScript superset. It takes someone with deep experience in JavaScript to identify this in order to make such a breaking change with confidence. If you’re introducing a breaking change, make sure it’s just breaking the 1% and not the 99%.

The enlightened few will use void 0 in place of undefined because the ECMAScript 3 standard defines undefined as a global property that can be defined!

JS++, on the other hand, makes undefined a keyword. void is then used as a type which represents both null and undefined.

Finally, there have been informal plans for a JS to JS++ translator. This will handle those few instances where void 0 is used to mean undefined and such. These cases are easy to parse and identify, and it makes introducing such a breaking change fathomable.

JS++ does not implement a const keyword. This was a design decision.

The variable x is declared as a constant using the const keyword. However, it very clearly is not constant (e.g. mathematical constants, which are typically our first exposure to constants). Where references are concerned, const does not actually create a “constant” and should thus be regarded as either a misnomer, and, in a worst case, should be disallowed as a matter of best practice in order to discourage semantic confusion and – consequently – bugs.

The situation is bad enough that Brendan Eich, the creator of JavaScript, even retweeted a blog post about this confusion: Instead, JS++ uses the final keyword. final prevents any further assignments to a variable; in other words, this is the last and “final” assignment. Thus, while the reference can be modified, the actual variable is still referring to that same reference. It was a final reference, and the reference we were referring to cannot be changed. Simple semantics and functionally identical, but it can go a long way in complex projects.

You never know if you’ll have a team member that doesn’t know the nuances of const, and – going back to semantic confusion – naturally assumes it works a certain way without looking it up and researching it. This is a common problem with JavaScript, where a lot of developers assumed it would be like C/C++ or Java and, thus, did not spend too much (if any) time learning it properly. Personally, I was guilty of much of the same in my early days. const being introduced into the official language specification did not take this behavioral issue into account and risks exacerbating the problem. (ASIDE: Issues like this, while minor and seemingly innocuous on the surface, can create exponentially many problems in larger applications and forced the hand for JS++ to break away from the ECMAScript specification – among a host of other problems.)

Yes, languages like C++ get away with using const. However, it can be argued that it’s so deeply embedded into the language in special ways it almost forces programmers to read the documentation and learn about it in depth (see: “const correctness” in C++). When you see:

You begin to realize that there is more to const in C++ than you may have figured out through a pure dictionary definition. This is not so when you see this:

The latter example (in JavaScript) does not encourage you to read the documentation or best practices. When we make assumptions that we “just know,” it can be dangerous.

We made a design decision based on experience and observation in the hope that final will be better because it doesn’t necessarily encourage the “I just know what it does” attitude. When it does, they should already be familiar with how it works from Java – a correct, consistent, non-confusing, and – most importantly – safe expectation.

I’ll be your host, Roger Poon. I designed the JS++ programming language, and I’ve been programming since 1997, beginning with Delphi 3/Pascal. You can follow me on Twitter or LinkedIn.

When we first released JS++ in October 2011, we got rave reviews. Our release coincided with the release of Google’s Dart programming language, and we received favorable comparisons given Google Dart’s Hello World debacle. People were saying we designed a better programming language than Google.

In the same spirit, we plan to continue the fight. We believe we can design a better programming language (that can co-exist with JavaScript) than Microsoft, Google, and Facebook. We hope you’ll enjoy the ride together with us!